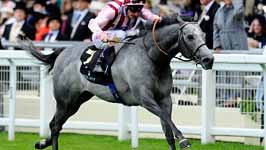 The prestigious Betfred Sprint Cup (3.50pm, Saturday) is the highlight at Haydock, attracting the fastest horses aged three or older.

Over the last ten years, favourites have come in three times but two 14/1 shots have also prevailed. The statistics provide no incentive to consider wide outsiders.

Clive Cox saddles two strongly fancied runners.  Lethal Force (pictured) heads the market and looks to be the one to beat under regular jockey Adam Kirby.  This four-year-old son of Dark Angel has proved ultra consistent this season. He lost out by the shortest of margins on his debut, in the Duke of York Stakes in May when James Fanshawe’s Society Rock beat him by a head. Since then he has twice reversed the placings. At Royal Ascot he beat Society Rock by two lengths in the Group 1 Diamond Jubilee Stakes. Three weeks later in the July Cup at Newmarket he proved that victory was no fluke by making all and beating him by a length and a half. A recent head injury has prevented Society Rock, last year’s winner, from lining up to defend his title.

Most recently Lethal Force went down by nearly two lengths to Freddy Head’s exceptional mare, Moonlight Cloud, in the Group 1 Prix Maurice de Gheest at Deauville.  Moonlight Cloud has won since, with 2000 Guineas hero Dawn Approach and Juddmonte International winner Declaration of War both behind her. So the form is solid gold.

In addition the going at Deauville was good to soft and the race distance was six and a half rather than six furlongs. Recent form suggests that Lethal Force is at his best on a sound surface. His two wins this season were on good to firm. Both defeats were on good to soft. If recent form is any indicator, this colt is the pick of the line up. He is rated 6lb higher than anything else in the race. The ground conditions rather than any particular rival look the biggest worry. One other slight concern is that he failed to score in both runs at Haydock in 2012, but he was not the potential champion sprinter material then that he is now.

Rain would not inconvenience Cox’s other runner, Reckless Abandon (update: Reckless Abandon is now a non-runner), the second favourite at 11/2. This three-year-old son of Exchange Rate was a bargain buy at £24K as a yearling (albeit three times the cost of Lethal Force!). He was unbeaten in his five starts as a two-year-old, scoring four times in pattern company. His triumphs included two Group 1 contests over six furlongs, the Middle Park Stakes at Newmarket and the Prix Morny at Deauville.  He was ridden by Gerald Mosse in both.

Reckless Abandon has run respectably in his two outings (both over five furlongs) under Adam Kirby this season but is yet to post his sixth win.  He came third by less than half a length from Robert Cowell’s Kingsgate Native in the Temple Stakes at Haydock in May. Most recently he came fifth in the Kings’s Stand at Royal Ascot, two lengths behind Sole Power. He will be reunited with Mosse in this race.

Tom Hogan’s five-year-old Gordon Lord Byron (13/2) came second to Society Rock in this race last year. He comes into the race on the back of a win in the Group 3 Desmond Stakes in Leopardstown on 15 August over a mile. He beat Sabrina Harty’s Ansgar by a neck.

In his previous run he came third in the Prix Maurice de Gheest, two and a half lengths behind Moonlight Cloud. He was less than a length behind the second placed Lethal Force. That form has to put him in with a chance here, especially if the ground is slower than good to firm. This son of Byron will have the expert assistance of Ryan Moore.

Another runner attracting some support is Edward Lynam’s Slade Power (8/1). This four-year-old son of Dutch Art has triumphed in two Group 3 contests in Ireland this season but was disappointing in his most recent outing in the Nunthorpe.

He didn’t have the best of starts and finished with only two of the 17 runners behind him.  He fared better in the July Cup and was third by just over two lengths to Lethal Force.  He could only manage seventh place in the Diamond Jubilee after another less than perfect start. Even if he gets away sharply, he seems well held by Lethal Force and is more likely to run into a place than take the top prize here.

John Gosden’s four-year-old Swiss Spirit (12/1) is another colt that has been found wanting in top class company. Most recently this son of Invincible Spirit was disappointing in the Nunthorpe, finishing towards the rear of the field. He previously finished second, one and a half lengths behind Moviesta in the King George at Goodwood. He also came second in the Temple Stakes in May, beaten by Kingsgate Native by a neck, after getting hampered at the start. He appears to want good or fast ground but will need to post a career best to figure here.

If the going is good to soft on the day, that has to help the chances of Richard Fahey’s Garswood (8/1). This three-year-old son of Dutch Art won last time out in the Group 2 Lennox Stakes at Goodwood. He beat David Simcock’s Caspar Netscher by a neck. In his previous run he came fourth in the Group 3 Jersey Stakes at Royal Ascot. This will be his first run over six furlongs this year. Whether this slightly shorter distance will suit him is questionable.

The oldest horse to line up is the eight-year-old Kingsgate Native (16/1) (Update: Kingsgate Native is now a non-runner).  This enigmatic veteran seems to perform best on a very sound surface. Forget about him if the word ‘firm’ is not in the going description. He posted his most recent win in May, in the Temple Stakes, over five furlongs on firm ground. Most recently he finished fifth in the Nunthorpe, just over two lengths behind his wining stablemate, Jwala. Considering the ground was good to soft, that was an extremely creditable effort.

This son of Mujadil has won a Group 1 over this distance before – but it was five years ago at Ascot. He has a major statistic to overcome if he is to triumph. No horse older than seven has ever won this race. He can only be of interest each-way.

Having looked at all the major contenders, Clive Cox’s stable star seems to be the pick of the bunch. If the going is good or faster on the day, LETHAL FORCE must be nailed on to add another Group 1 victory to his CV. He may be the favourite but he looks to provide decent value at best current odds of 3/1 with Betfred and Bet365.

Fiona Derek is our Reality TV and horse racing expert. The only time you won’t find her riding or mucking out a racehorse is when she is watching Reality TV or racing on the box.