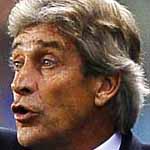 Plenty of goals should be expected when Tottenham Hotspur host Manchester City at White Hart Lane on Wednesday (19:45 GMT, live on BT Sport).

Spurs come into the fixture on the back of six undefeated league matches under the stewardship of Tim Sherwood. They are fifth in the Premier League table, level on points with Liverpool in fourth, with 43 points from 13 wins, four draws and five defeats.

Sherwood has implemented a more attacking style of play since replacing Andre Villas Boas just before Christmas. This change of approach has been reflected in an increased goal output, up from 0.94 per match under Villas Boas to 2.33 per match under Sherwood. Spurs are getting more men forward and creating better opportunities.

Emmanuel Adebayor, ostracised under Villas Boas, has starred, providing five goals and two assists, while recent form would suggest that both Christian Eriksen (superb in the win away to Swansea) and Vlad Chiriches are getting to grips with English football. Youth team graduate Nabil Bentaleb has impressed with his tenacity and calmness in possession.

Caution should, however, be exercised, as Sherwood’s six matches in charge have seen his side post unsustainably high scoring and save percentages, both of which will, in time, revert to the mean. Spurs also have some very difficult fixtures coming up. Five of their next eight matches are against fellow top eight sides, including the current top three.

Sherwood looks to have an almost full-strength squad to pick from, with Andros Townsend, Jan Vertonghen, Paulinho, Sandro and Younes Kaboul all back in contention following injury layoffs. Erik Lamela (thigh) will face a late fitness test.

Man City come into this on the back of 19 matches undefeated in all competitions, including victories in each of their last seven league matches. They are second in the Premier League table, just a point behind leaders Arsenal, with 50 points from 16 wins, two draws and four defeats.

After a relatively slow start that saw them lose four of their first 11 league fixtures, City have really hit their stride over the last couple of months and are the current bookies’ favourites in the title betting odds. Problems still persist in defence, but they are so good going forward that they are regularly able to emerge victorious despite conceding one or more goals.

City have scored 63 goals in their 22 league matches to date and are on course to set a new Premier League record for the highest goals total in a season if they can keep their current rate going for the remainder of the campaign. They have only failed to score on two occasions and have scored two or more goals in eight of their last 10 league matches.

Sergio Aguero has been in stellar form, with 25 goals in 24 appearances in all competitions. With Alvaro Negredo alongside him, David Silva and Jesus Navas behind and Fernandinho and Yaya Toure offering a further goal threat from deep, City have multiple ways of breaking down even the most obdurate of opposition defences.

Manuel Pellegrini (pictured above) will definitely be without the injured Samir Nasri (knee) for this match, while Negredo (shoulder) and Silva (hamstring) will face late fitness tests.

City won 6-0 when these sides met at the Etihad earlier this season and have generally had the better of Spurs in recent fixtures, winning five of the last six meetings. Tottenham did emerge victorious from last season’s equivalent fixture, coming back from a goal down to win 3-1 thanks to three goals in the final quarter of an hour.

Spurs come into this match fresh having not been involved in FA Cup action at the weekend, but that is unlikely to prove a decisive factor as Pellegrini rested some of his regular first team players for City’s 4-2 win over Watford. He has a strong squad to pick from and City have momentum and good form on their side.

These teams are very similar in the way they set up, but City have the better, more decisive players in the final third, which is likely to see what is sure to be an entertaining encounter end in their favour.