Reigning Premier League champions Man Utd begin their defence with a potentially tricky visit to the Liberty Stadium on Saturday (17:30 BST, live on Sky Sports 1) to face a Swansea side hoping to build on two excellent seasons in the top flight.

The fixture will represent the first occasion in going on 27 years that someone other than Sir Alex Ferguson has led United in a league match, with former Everton manager David Moyes given the unenviable task of succeeding 13-time Premier League winner. 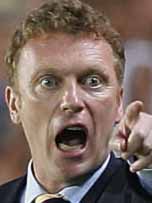 Moyes has not enjoyed the most comfortable of starts to life at Old Trafford. United have achieved average results in pre-season and have been unsuccessful in luring his primary transfer targets to the club. The future of Wayne Rooney, a target for Chelsea, remains unresolved.

But these are early days yet and with a couple of weeks still to go until the end of the transfer window, United still have time to strengthen their ranks. The likes of Moyes’ former Everton charges Marouane Fellaini and Leighton Baines, as well as Real Madrid midfielder Luka Modric, have been linked.

Moyes did, at least, pick up his first silverware in winning the Community Shield against Wigan last weekend. Robin Van Persie scored both goals in a 2-0 victory and Moyes will hope that the Dutchman can continue his supreme scoring form of last season (26 goals in 38 appearances) into the new campaign.

United were certainly not at the top of their game against the Championship side, but their swift passing interchanges on the counter attack were sufficient to produce the chances required for victory. The fluid 4-4-1-1 formation in which they started the match looks their most likely formation for the early weeks of the league season.

Shinji Kagawa will be hopeful of starting against Swansea after being rested for the Community Shield and will also expect to play a more prominent role in his second season at the club, especially if Rooney is sold. The Japanese international flickered intermittently in his debut campaign but has the necessary quality to make a more concrete impression this time around.

Moyes has a number of injury concerns coming into the opening weekend, with the likes of Ashley Young, Darren Fletcher, Javier Hernandez, Michael Carrick and Nani all likely to be missing. In addition, full-back Rafael picked up a hamstring injury against Wigan and looks set to miss the first month of the season.

His opposite number Michael Laudrup has few such worries, but has been robbed of influential midfielder Jonathan de Guzman. The Dutchman was injured in training ahead of his national team’s friendly against Portugal in midweek and will not be back in action until next weekend.

Otherwise, it has been an excellent summer for Laudrup and Swansea, with an unbeaten pre-season campaign allied to a convincing 4-0 aggregate victory over Malmo of Sweden in the third qualifying round of the Europa League. Despite rumours of friction between Laudrup and the board, the club have also done some superb business in the transfer market.

Swansea’s headline deal was the club record £12 million they spent on Ivory Coast striker Wilfried Bony, scorer of 31 goals in 30 appearances for the Dutch side Vitesse last season. There are concerns as to whether he can maintain his unnaturally high finishing percentage of last season, but the tall, strong and quick striker looks a good fit for the Premier League, and capped his competitive debut with a double against Malmo.

All in all, Swansea have bolstered a squad that was already good enough for a 9th place finish and success in the League Cup last season. With Laudrup having proved himself to be an excellent coach, they will hope to push on again and compete for a place in the top eight this time around.

These sides drew 1-1 when they met at the Liberty Stadium last season, but United have the better overall record since Swansea returned to the top flight, winning each of the other three encounters between the sides.

With that said, all have been tightly contested and with Swansea having strengthened and enjoyed a good pre-season they look well placed to deny Moyes victory in his first league match in charge of the Red Devils.